4 TIPS FOR A TICK-FREE SUMMER 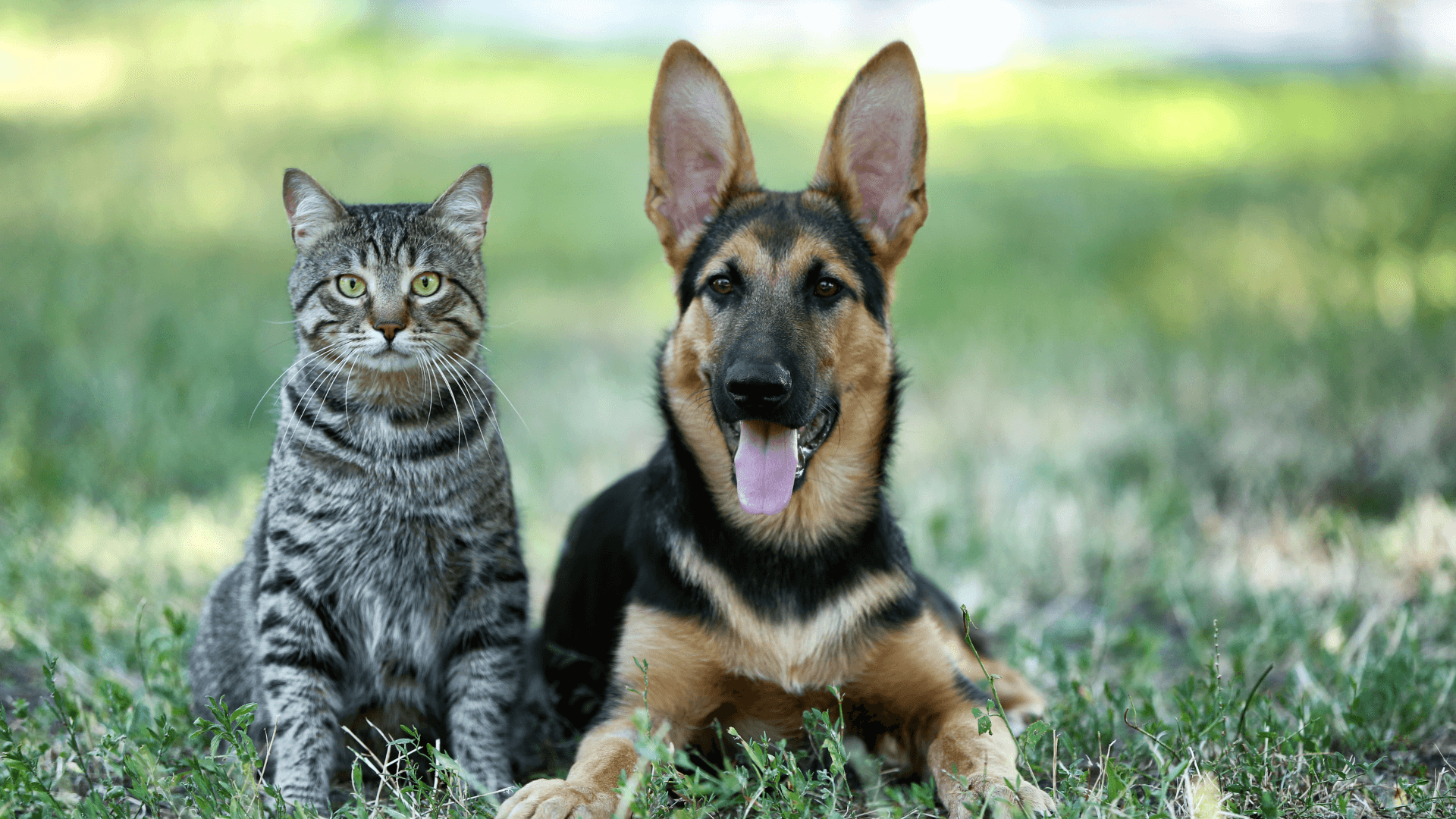 While ticks can be a problem for cats and dogs all year round, they are especially problematic during summer. With the warmer weather, our pets spend more time outdoors and living their best lives running through bushes - aka flea and tick city.

There’s nothing like that ick you feel when discovering a tick on your pet’s body. Luckily, ticks on dogs and cats are pretty common if they spend time outdoors. The good news is that this means that there is a long list of effective tick preventatives to help you keep your furbabies safe.

Get ready, this post will share some meow-vellous tick prevention tips to help you achieve a tick-free summer. Let’s jump in!

WHERE CAN PETS GET TICKS?

Ticks can be picked up by your cat or dog anywhere, especially in shrubland or tall grass. They'll grow in size as they feed on your pet's blood. Ticks can transmit disease as they feed, so tick preventatives are im-paw-tant.

TICKS ON CATS & DOGS: WHAT TO LOOK FOR AND WHERE TO LOOK

While cats are less likely to get ticks than dogs, both pets are still at risk if they spend time outside. How can you identify a tick? Look out for a bug with eight legs and an egg-shaped body that will become larger and darker when filled with blood. Some ticks are a red color and a little flatter, but you'll be able to identify them when you see them.

Ticks will try to hide on your pet, and depending on the fur color, they can sometimes be tricky to spot. Here are seven places to check for ticks on your pets:

If your pet ventures outside, we suggest regularly checking for ticks so that you don't only spot them once they're big and more visible. They carry some nasty diseases that can cause serious harm to your pet's health. 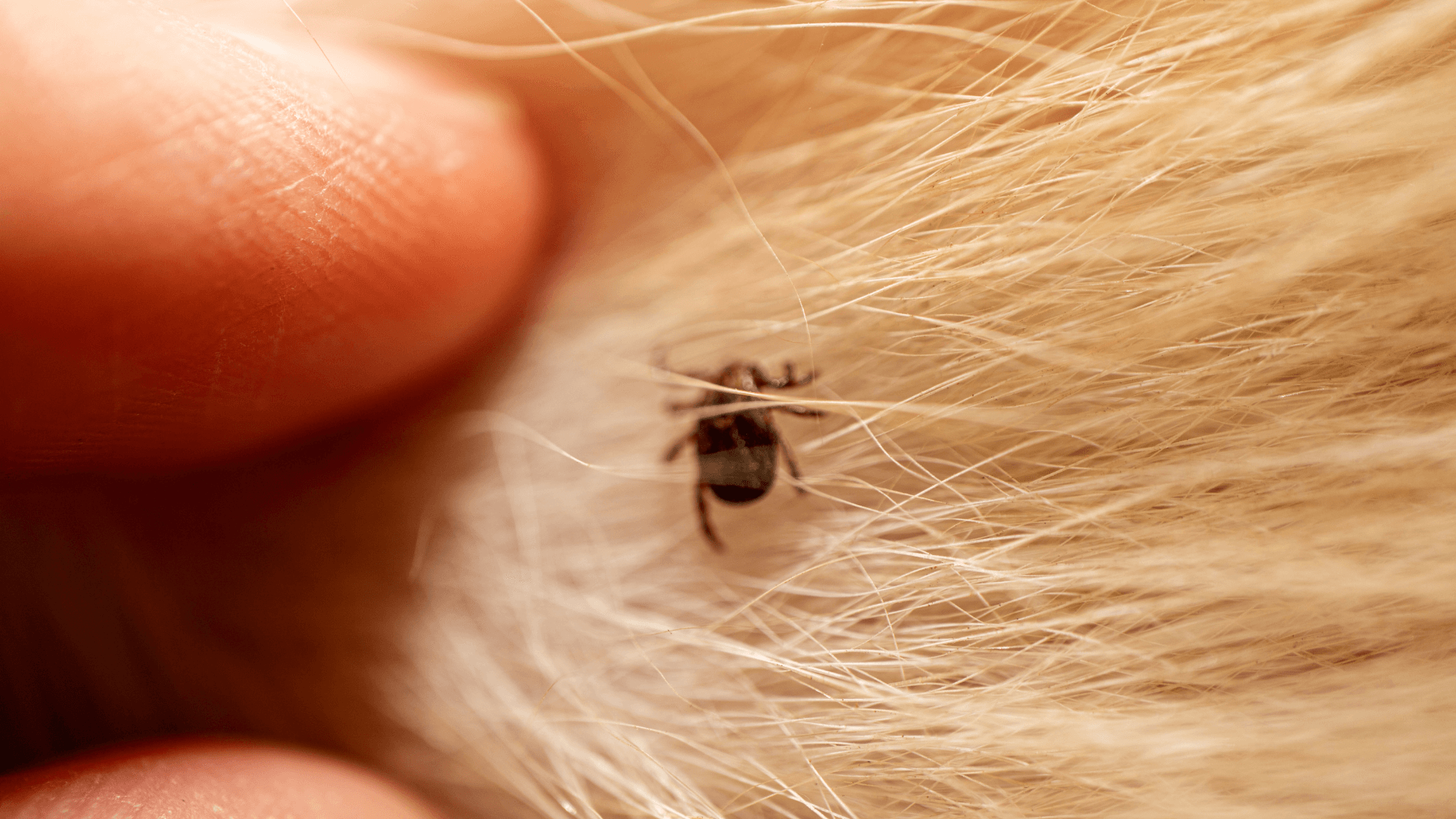 PET DISEASES FROM FLEAS AND TICKS

Fleas and ticks often go hand in hand as these are the most common parasites that feed on our pets. Not only can they cause itching and discomfort, but they also carry diseases that they can spread to our beloved furbabies with a tick bite. Some tick-borne conditions to look out for include:

Lyme disease is seen in dogs and humans. Lyme disease symptoms in dogs can include lethargy, lameness, fever, joint pain or swelling, loss of appetite, and swollen lymph nodes. It can be successfully treated.

Canine Bartonellosis might be less common than some other tick-borne diseases, but the symptoms of this disease can be severe. Some of the earliest signs of Canine Bartonellosis include intermittent fever and lameness, but if not treated, this condition can lead to serious conditions such as heart or liver disease.

This disease is found worldwide and is caused by several types of ticks: The Brown Dog Tick, Lone Star Tick, and American Dog Tick. Signs include fever, loss of appetite, and low blood platelets (to help with blood clotting), often noted by nose bleeding or other signs of bruising or anemia. Symptoms start about 1-3 weeks after the bite of an infected tick, and dogs that receive early treatment can have a good prognosis.

Anaplasma is a disease caused by a bacterium carried by Black-Legged Ticks. Although it can be seen worldwide, there are two Anaplasma species that are known to detect disease in North American dogs:

The signs are similar to Lyme disease (lethargy, lameness, fever, joint pain or swelling, and swollen lymph nodes), though dogs with Anaplasma often have low blood platelets that cause bleeding disorders.

4 TIPS FOR A PET-FREE SUMMER

Ticks can attach to your dog's skin or cat's skin without you even knowing! When the warmer weather graces us, we all love nothing more than soaking up the sunshine outside with our furbabies, and the ticks love this too! They do their best to get in on the action by attaching themselves to our pets.

So, in true Door Buddy style, we’re sharing our most pawsome tips with you. After all, we want to keep you and your floofs safe for one fur-tastic summer!

Brushing your pet is a purrfect time to do a flea and tick check. Being small and camouflaged, you may not even know a tick is there until it has caused harm to your pet. To prevent this, regularly check your cats and dogs for ticks. You'll want to refer back to those areas when mentioned above.

Avoid Areas Where There is High Grass

Ticks like to lie low and live close to the ground in long grass or leaf debris. If you're taking your dog for a walk during tick season (generally the warmer months between March and September), we'd suggest avoiding or limiting exposure to long grass. If you’re prone to deer sightings, take double precautions in these areas.

A helpful tip is to walk in the center of pathways away from vegetation along the edges and avoid overhanging plants where ticks could be lying waiting for their next meal. 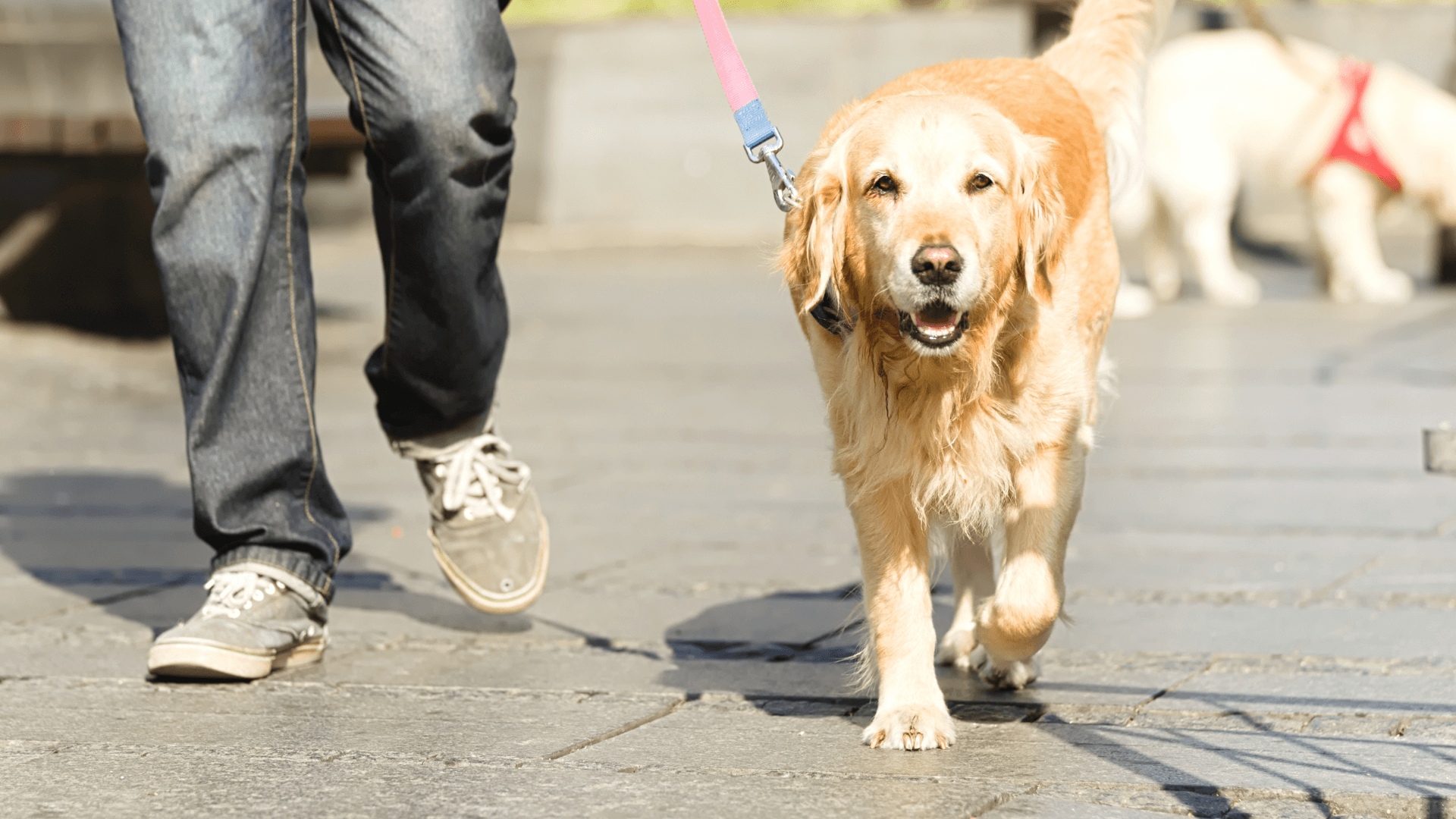 Tick prevention treatments come in different formats, such as spot-ons, tablets, and collars. Some treatments kill the ticks, while others can be used for prevention and repelling ticks. Products act differently, so you can discuss this with your veterinarian to see what suits you and your pet best.

You'll often find flea and tick prevention treatments in one, protecting your furbaby from both of these nasty parasites and tick-borne diseases.

Check & Protect Yourself from Ticks

If your pet is spending more time outdoors, chances are that you are too! So, if you're out walking in tick-prone areas, you'll need to dress for the occasion so you don't pick up any ticks yourself, which can put the whole household, including your pets, at risk.

Ticks can make humans sick too! Try to cover your skin to prevent tick bites. Always wear trousers, not shorts, and tuck them into socks, so your ankles are covered. Don't forget always to check your body for ticks after a walk.

HOW TO REMOVE TICKS

If you find a tick on your pet, try not to panic! It's im-paw-tant that you know how to remove a tick properly to prevent any diseases from spreading and harming your dog. You'll want to remove any ticks immediately after finding them on your pet to restrict exposure to any infections carried by the parasite.

Tick hooks are a simple, handy device you can buy in high street pharmacies to remove ticks at home. Follow the instructions to pull out the tick whole quickly. Unlike tweezers, tick hooks are less likely to leave the tick's strong mouthparts in your pet, which continue to pose an infection risk even when you've removed the rest of the tick's body.

Don't try and remove the ticks with your bare hands, or try to burn off a tick or "suffocate" it with a layer of petroleum jelly, as these methods could injure your cat and typically won't bother the tick. Once the tick has been removed, clean the cat or dog's skin where the tick was and dispose of the tick in an alcohol-soaked paper towel. 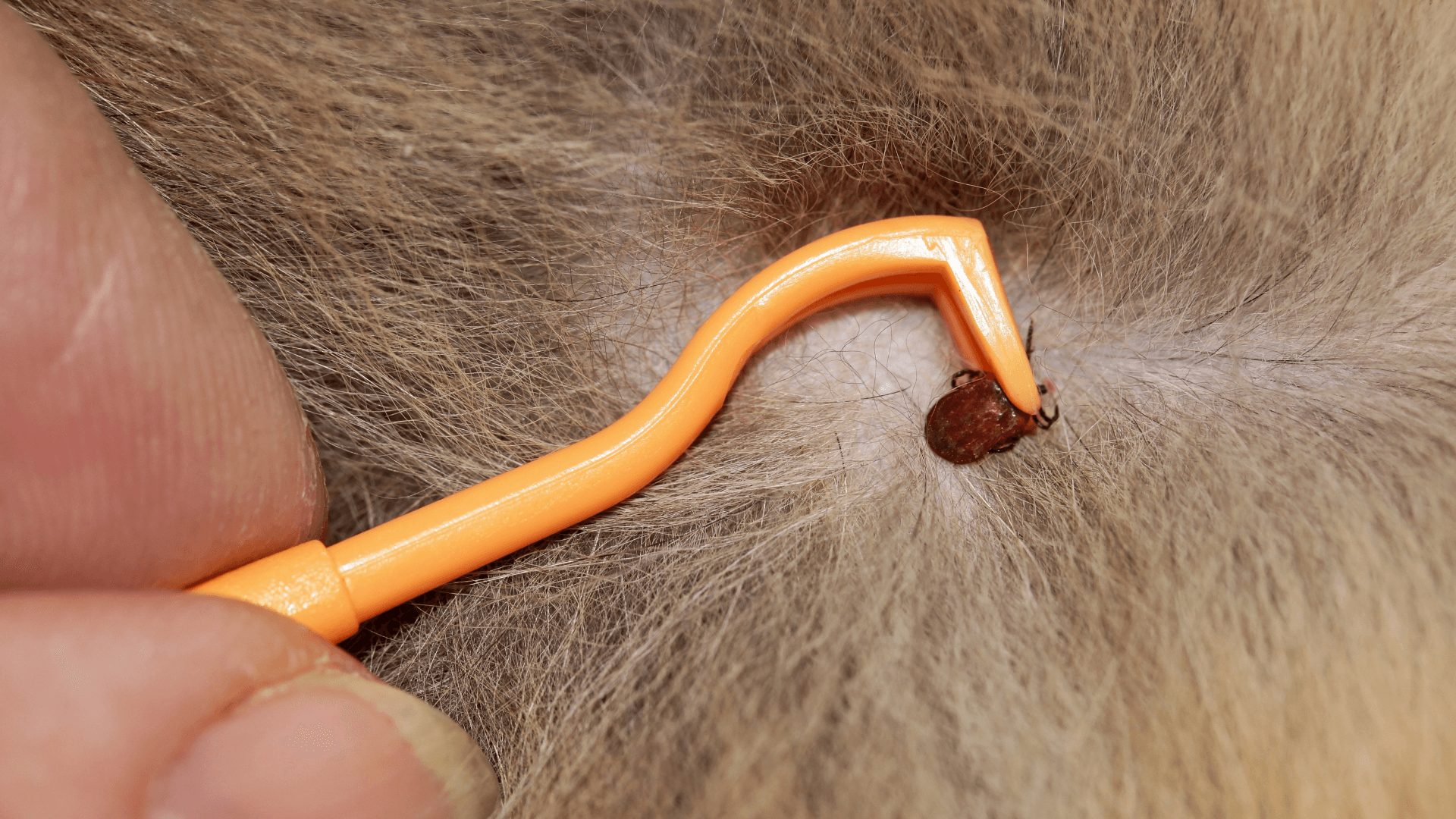 A pet first aid kit is always a good idea and can come in handy when dealing with ticks on pets. Add your tick hook to your kit for when you need it. As much as our pets might love being outdoors in the spring and summer, as pawrents, our job is to keep them safe. So, sometimes we need to keep them indoors for a bit to do this.

Nobody wants to miss out on the fun because of some nasty parasites! Armed with the knowledge of how to identify ticks, where to check for ticks on your pets, how to prevent the buggers, and how to remove ‘em if you do spot them, we think you’re well on your way to enjoying a tick-free summer! 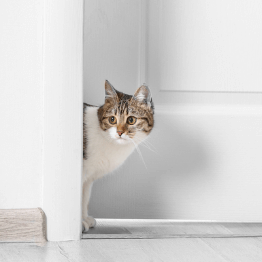 WHY DO CATS HATE CLOSED DOORS 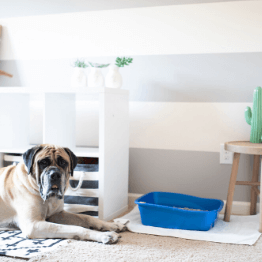 HOW TO KEEP THE DOG OUT OF THE CAT LITTER BOX 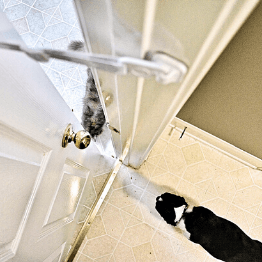 HOW TO INTRODUCE CATS TO YOUR HOME 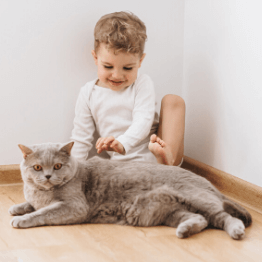 BABIES & CATS: HOW TO ACHIEVE PURFECTION